URGENT: The Senate Judiciary Committee is trying to force through an anti-LGBT bill at this very moment.

In a shameful act of political maneuvering, members of the Senate Judiciary Committee just tainted a good adoption bill (HB 159) by adding a blatantly discriminatory amendment that seeks to allow adoption agencies—even ones that receive public funding—to discriminate against same-sex couples and refuse to work with prospective LGBT parents.

Right now, our best shot at blocking this insidious attack is to flood Gov. Nathan Deal’s office with phone calls urging him to put a stop to HB 159.

Then click here to let us know if you were able to get through. 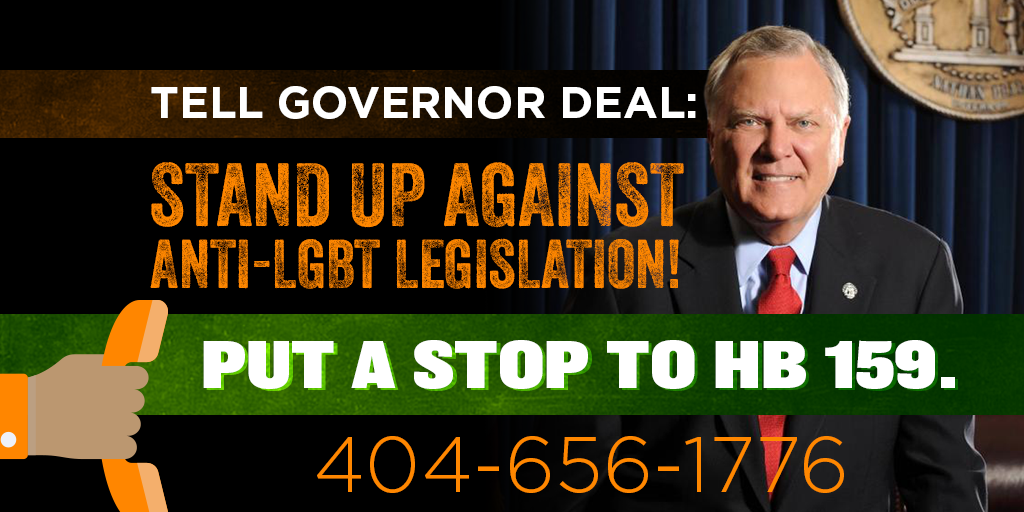 HB 159 as amended is despicable on so many levels. But here are some topline points you should hit in your call to the Governor:

The amendment to HB 159 doesn’t just seek to cast LGBT Georgians as second-class citizens. It does so at the expense of some of the most vulnerable people in our communities: Young people with no family to call their own.

We’ve got to act fast to put a stop to HB 159—because right now, the Senate Judiciary Committee is poised to pass this tainted bill at any moment.

Then click here to let us know how the conversation goes.

P.S. Here’s a sample script for your call:

Right now the Senate Judiciary Committee is considering an amendment to House Bill 159 that would write discrimination into Georgia’s adoption laws.

As amended, under HB 159 an adoption agency could refuse to work with same-sex couples and LGBT parents in placing children with adoptive families—all while receiving taxpayer funds.

I am urging Governor Nathan Deal to take steps to put an end to this tainted version of HB 159.

Taxpayer dollars should never be used to discriminate.

LGBT Georgians are just as qualified to parent and provide loving homes for children in need.

And with our foster and adoption care systems overflowing, limiting the pool of prospective parents for children in dire need of forever families puts orphans, and foster youth in harms way.

I urge the Governor, for all of the aforementioned reasons, to block HB 159 from advancing out of the Senate Judiciary Committee.

Thank you for your time.

For Transgender Day of Visibility, Max Wants Other Georgians to Know He is More than A Trans Man Max Nijssen ~ Morrow, GA
URGENT: Adoption Bill Amended to Push Anti-LGBT Discrimination in Georgia March 16, 2017 SHARE THIS STORY