Mother of a Transgender Child in Georgia: You Are As You Were Meant to Be Amanda Dewis & Family ~ Johns Creek
The Supreme Court case of a Clayton County man who was fired for being gay could affirm employment protections for LGBTQ people nationwide August 16, 2019

For 10 years, Gerald Lynn Bostock served his community as a child welfare services coordinator in Clayton County, Georgia, helping provide children in difficult circumstances with court-appointed volunteers to help them get care and services. Gerald never had a problem at work while his coworkers assumed he was straight. But when he told them he was gay, they ridiculed and teased him—and within months, he was fired.

Gerald Lynn Bostock’s case has made its way all the way up to the Supreme Court, and it has huge implications for LGBTQ Americans and our freedom to live our lives free from discrimination. 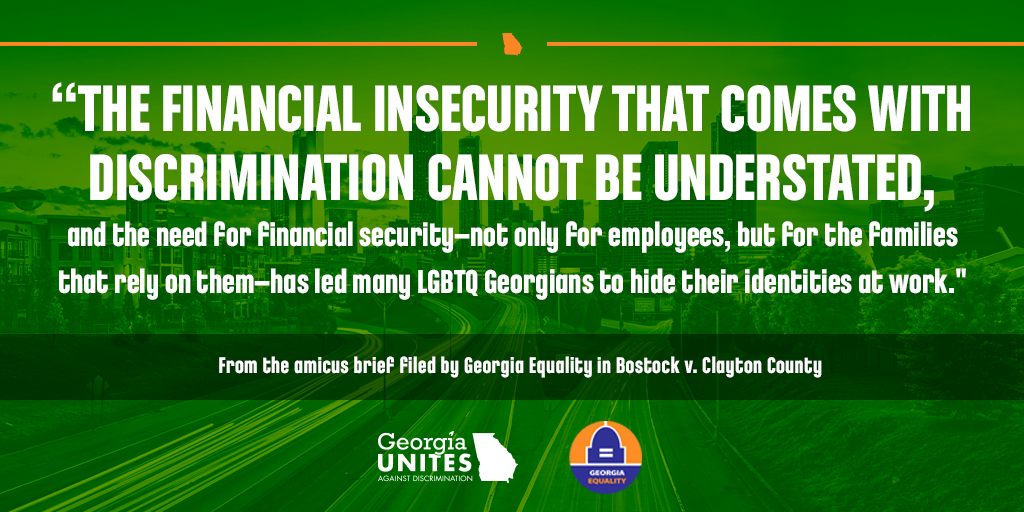 Like Gerald, Don Zarda and Aimee Stephens both faced discrimination at work. Aimee was fired from her job as a funeral director for being transgender, and Don was fired from his job as a skydiving instructor for being gay. Aimee has fought her case all the way to the Supreme Court. And because Don tragically and unexpectedly passed away 2014, his family has fought his for him.

This trio of cases gives the Supreme Court the opportunity to say definitively: All LGBTQ people should be able to work hard, make a living, and support themselves and their loved ones without fear of humiliation, harassment, or discrimination at work.

No matter what happens at the Supreme Court, Georgia lawmakers must still act to ensure LGBTQ Georgians are protected from discrimination in housing and public places
Join the Campaign for LGBTQ Civil Rights in Georgia

Here in Georgia, we’re doing all we can to make sure the Court comes down on the right side of history. Just last month, Georgia Equality—the leading voice in our campaign for LGBTQ-inclusive nondiscrimination protections—filed an amicus brief with the Court, arguing that no one should have to worry that they cannot be their true selves for fear of being fired or denied a job or promotion.

Luckily, the law is on our side. Title VII of the Civil Rights Act of 1964 prohibits employers from discrimination against their employees based on a number of factors, including sex. And according to Supreme Court decisions dating back to 1989, Title VII means that you can’t be discriminated against at work for failing to conform to gender stereotypes. Many federal courts and agencies have long held that firing someone simply for being LGBTQ is unlawful sex discrimination based in gender stereotyping.

The Supreme Court needs to agree and affirm these existing protections.

But we’ve got to be honest—a ruling suggesting it’s lawful to have fired Gerald or Don for being gay, or Aimee for being transgender, would be a huge step backwards. And it would shock the supermajority of Americans from all walks of life who support LGBTQ nondiscrimination protections. According to polling, 7 in 10 Americans actually want LGBTQ people protected from discrimination in employment, as well as housing and public places.

No matter how the Supreme Court rules, our work will not be done.

If the Court rules to uphold discrimination, we will still have the power to stand up for the 360,600 Georgians who identify as LGBTQ.

With your help, we will enact explicit nondiscrimination protections to make Georgia an even better place to live and raise a family—regardless of one’s faith, ethnicity, sexual orientation, gender identity or military status.

And if the Court rules to protect LGBTQ Americans in the workplace once and for all, we will keep working to expand these freedoms to every facet of our lives.

Federal law doesn’t currently explicitly protect LGBTQ people from discrimination in public places like restaurants, stores, or doctors’ offices; or federally-funded programs. That’s why Congress must pass a bill like the Equality Act that ensures express and enduring protections for as many LGBTQ people as possible, in all areas of life.

And remember, no Supreme Court decision will never change this basic fact: Dignity and respect applies to everyone, no matter who you are, who you love, or what zip code you call home.