Mother of a Transgender Child in Georgia: You Are As You Were Meant to Be Amanda Dewis & Family ~ Johns Creek
The Facts: Federal Religious Protections & Anti-LGBT Discrimination

Proponents of passing a License to Discriminate in Georgia are test-driving a new talking point: Saying they won’t pass any bill that’s more strict than federal “religious freedom” laws. 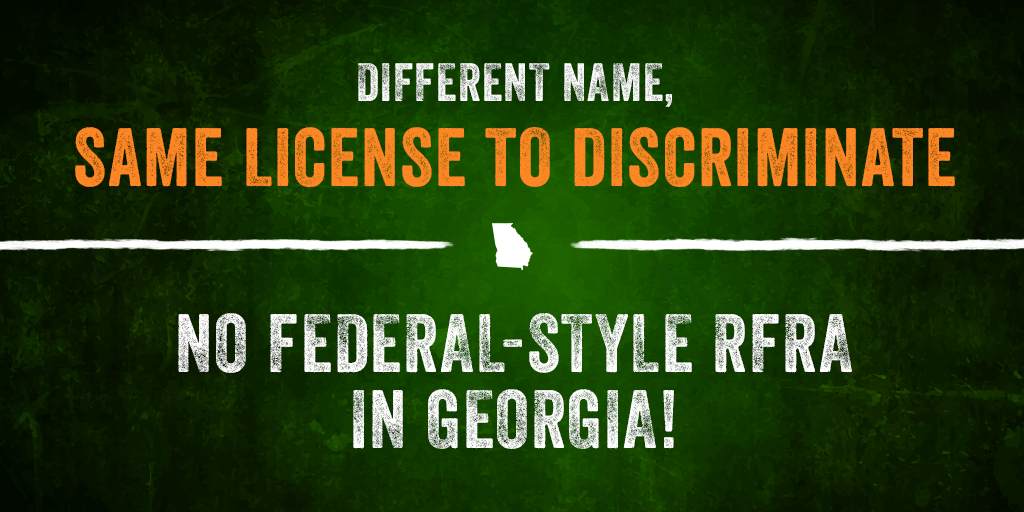 That sounds reasonable on its face, but it’s not. It’s the same call for state-sanctioned discrimination that we’ve heard for the last five years. Our position is unchanged: Right now, in Georgia, no RFRA is a good RFRA.

Unlike Federal Law, Georgia Has No Civil Rights Protections

At the federal level, civil rights laws often prevent religion from being used to discriminate—but there are no federal non-discrimination protections for LGBT people. Georgia has no statewide protections either.

Even in existing federal law, we’re now seeing the balance tip toward discrimination. Courts are interpreting laws that protect religious practice in ways that encourage discrimination, and enforcement of federal non-discrimination law is weak. Americans United for Separation of Church and State has a great fact sheet that lays this situation out in more detail, but essentially there are four broad reasons a federal-style RFRA could not work in Georgia:

Our Position Is Unchanged: No RFRA in Georgia

These reasons are more than enough to continue to oppose RFRA, and speak out forcefully against any attempt by opponents of equality to say these laws are anything but state-sanctioned discrimination.

We need to push back fast against this new strategy for bringing a License to Discriminate to Georgia. Share this FAQ about their scheme, so fair-minded Georgians know the truth.