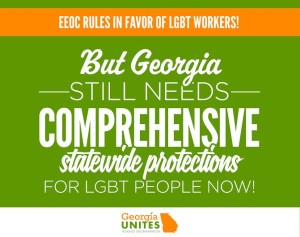 Yesterday, the federal Equal Employment Opportunity Commission ruled that employment discrimination on the basis of their sexual orientation violates Title VII of the 1964 Civil Rights Act.

This is an important step forward in the effort to stop discrimination against LGBT people in Georgia and across the nation. But let’s be clear: it’s not nearly enough.

The only ironclad way we can protect LGBT people from discrimination is to pass a law that explicitly does so.

Click here right now to contact your lawmakers and urge them to support non-discrimination legislation that would protect everyone in Georgia, including LGBT people, from discrimination.

The EEOC’s ruling affirms—like a growing majority of Georgians believe—that it should be illegal to fire someone simply because of who they are. Still, this ruling isn’t a secure guarantee of protection against discrimination in Georgia or anywhere else.

Because these decisions could later be overturned, because they aren’t binding for most private employers, and because they don’t protect LGBT people looking for housing or using public accommodations—we MUST continue to work until we can pass statewide non-discrimination protections.

Right now under Georgia law, there are absolutely no explicit protections for LGBT people in employment, housing and public accommodations. The only way we’ll change that? Our campaign to include sexual orientation and gender identity in GA’s civil rights law.

Please, take a moment right now to contact your lawmakers and let them know: This EEOC ruling is an important step forward, but the only lasting way to prevent discrimination is to update Georgia law.

Until Georgia law explicitly protects LGBT people from discrimination, our work is far from over.