It’s been a whirlwind week at the Capitol, with good news and bad news for proponents of equality. But we’re happy to report that we successfully blocked Senate Bill 221 this year. 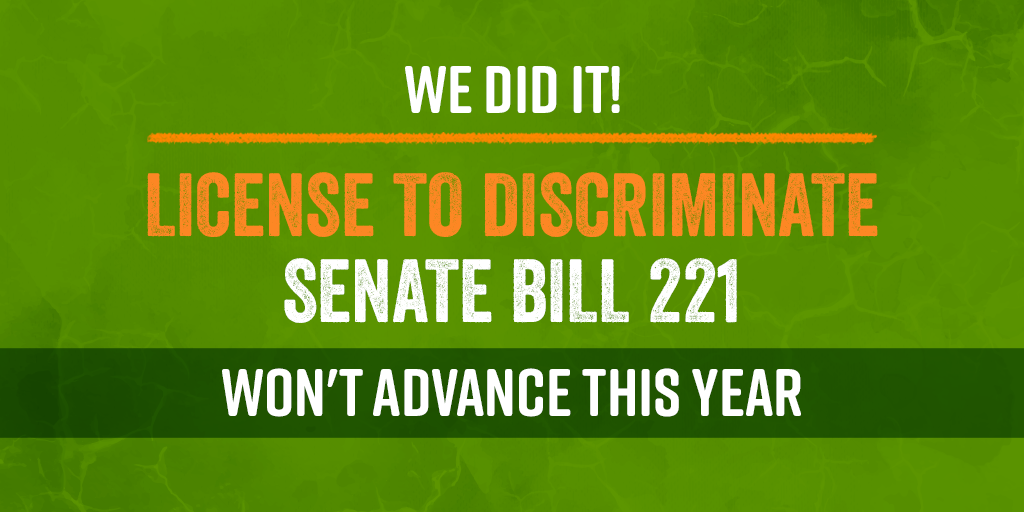 On Monday, we were gearing up for a sixth year of fighting legislation aimed at enacting a license to discriminate against LGBTQ Georgians. And with Senate Bill 221 being the most brazen attack since 2016’s RFRA, we knew our movement against it would need to be massive.

And it was. In the days after lawmakers placed SB 221 on the committee agenda, nearly 1,000 grassroots supporters like you logged calls and emails, wrote letters, and came down to the Capitol to speak in person about the dangers of a license to discriminate. And our business allies spoke up immediately too, reminding lawmakers of the potential $2 billion price tag and threats to Georgia’s economic edge that could follow.

Stay engaged and help us stay ready for the next fight, when and if it comes: Chip in $15 or more to Georgia Unites Against Discrimination. And there’s another way for you to stay engaged: Join Georgia Equality’s annual LGBTQ Lobby Day on March 21.

And again, it worked. Senate Bill 221 was taken off Monday’s committee schedule, Wednesday’s hearing was canceled, and lawmakers didn’t attempt to revive it before yesterday’s Crossover Day deadline.

In fact, after years of advocacy, the House of Representatives actually passed LGBTQ-inclusive hate crimes legislation—the first-ever bill specifically protecting LGBTQ Georgians to pass either legislative chamber in Georgia! This is incredible momentum for our movement to pass LGBTQ-inclusive civil rights legislation.

BREAKING NEWS: Tonight, in a vote of 96 to 64, The Georgia State House of Representatives passed HB 426 – the first time a hate crime bill that includes protections for LGBTQ Georgians to ever pass either legislative body in Georgia. Click for details: https://t.co/svqhhHdBIP pic.twitter.com/l5uHFIwgZz

Every year it gets harder for anti-LGBTQ extremists in the legislature to pass a discriminatory bill because of the bipartisan coalition of advocates, business leaders, people of faith, and others dedicated to stopping it. And this year, we almost stopped it before it even started.

But we’re not safe just yet: SB 221 is still active legislation through next year, meaning it could come back. And bad amendments could still come up before this session ends on April 2.