Lawmakers have been gone from under the Gold Dome for a month, but that doesn’t mean advocates for LGBTQ-inclusive nondiscrimination protections are putting the brakes on advocacy.

In fact, local movements for LGBTQ nondiscrimination are more robust than ever. 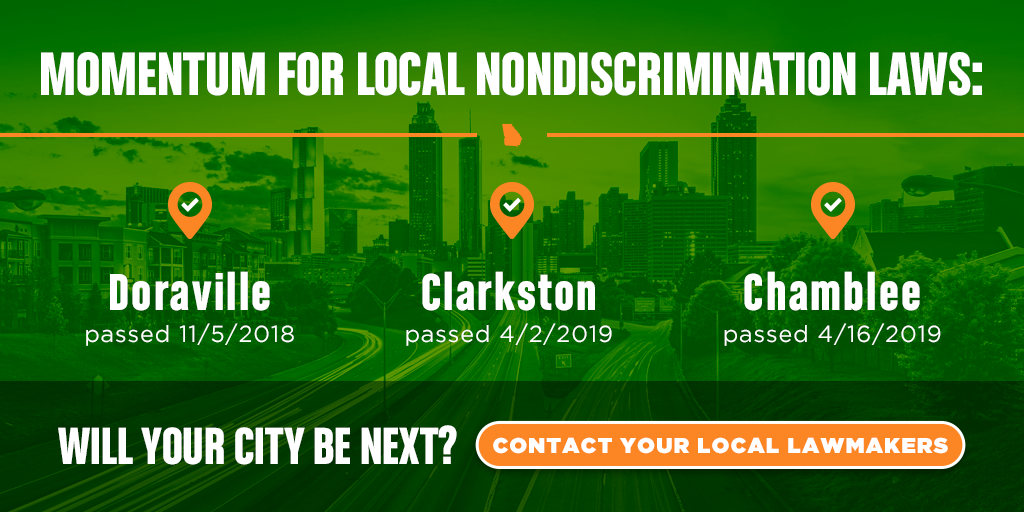 Since 2000—and after an update in 2013 to include transgender people—Atlanta has been the only city in Georgia with a local law that prohibits denying someone a job, a home or service in a public place because they’re LGBTQ.

That changed in November 2018, when Doraville enacted an LGBTQ-inclusive local nondiscrimination ordinance. And in the last six months, two more cities—Clarkston and Chamblee—have followed suite.

Now, the pressure is on for other cities and counties to be next. Athens, Brookhaven, Decatur, DeKalb County and Gwinnett County are all actively considering a local ordinance.

Ideally, our state lawmakers would pass a statewide civil rights law that explicitly protects LGBTQ people from discrimination. There’s also the federal Equality Act, which would enact these protections nationwide. The Equality Act got its first hearing ever last month, and just passed out of the House Judiciary Committee on Wednesday, May 1.

But until that happens, local nondiscrimination ordinances are a way we can protect LGBTQ Georgians immediately—because discrimination is happening every day, in communities across the state, and solutions are needed now.