When Discrimination Happens to You: One couple shares their story, calls for protections Jake Moore & Amber Paoloemilio
In the Race for Amazon’s HQ2, How Does Georgia Compare to Its Peers in Terms of LGBT-Inclusivity? February 14, 2018

Inclusivity is quickly becoming the most-talked-about topic in determining which states Amazon might choose for its coveted second headquarters, which would bring $5 billion in investments and 50,000 jobs to city that snags it.

In this area though, Georgia lags behind many of the top contenders for this economic boon, known informally as HQ2. 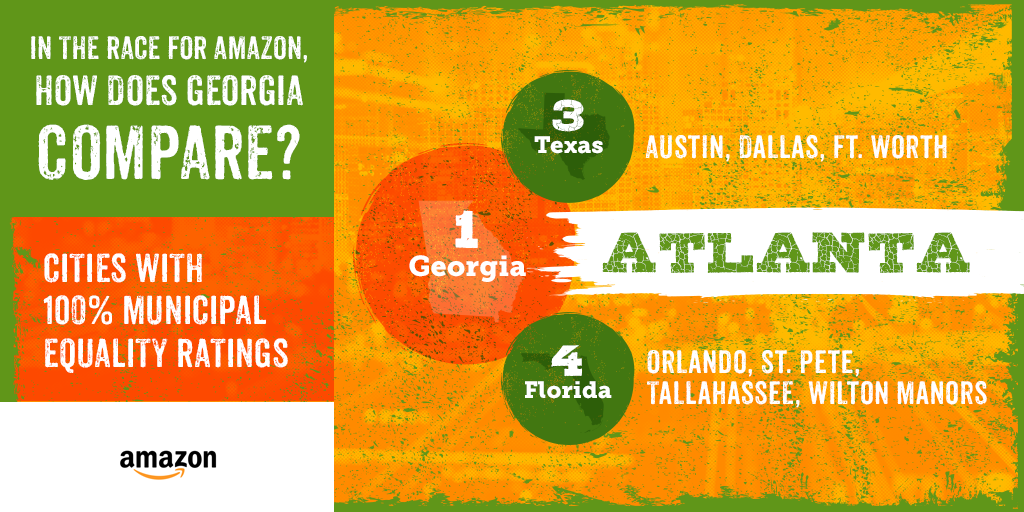 And Georgia has no statewide law protecting LGBT people from discrimination, though Atlanta does have a robust local ordinance. But in general, Georgia doesn’t match some of its closest competitors in South, and could even give itself a leg up on that competition by passing a comprehensive, LGBT-inclusive civil rights law.

Take, for example, the five states that have no statewide laws against discrimination in public accommodations, places like restaurants, retail shops and hospitals. They are Alabama, Mississippi, North Carolina, Texas and Georgia.

Cities in three of those states—Raleigh, Austin, Dallas and Atlanta—are on Amazon’s top-20 list. Against Raleigh, Atlanta may have an advantage: The economic taint of the discriminatory House Bill 2 still lingers over North Carolina, and the city of Raleigh has no LGBT-inclusive non-discrimination ordinance.

Against other Southern cities and states though, we may be at a disadvantage. Not only do Dallas, Austin and Miami have LGBT-inclusive local non-discrimination ordinances, Florida and Texas can count more major cities (three and 15, respectively) that have inclusive protections, ensuring more of their population is protected from discrimination.

Atlanta is the only city in Georgia with comprehensive local protections, and Georgia doesn’t match both Florida and Texas in the overall protections afforded to LGBT people.

Atlanta is the only city in Georgia with comprehensive local protections, and Georgia doesn’t match both Florida and Texas in the overall protections afforded to LGBT people.

In the end, these lapses could make or break Georgia’s chances at landing HQ2—or not. Nine of the 19 US cities on Amazon’s list of top-20 finalists are located in states with some level of LGBT-inclusive non-discrimination protections. That leaves 10 that aren’t.

But in a landscape as uncertain as this, it simply makes sense for Georgia to give itself every advantage possible by rejecting discriminatory legislation like the current SB 375, and passing a comprehensive, LGBT-inclusive civil rights bill like Senate Bill 119.