For the fifth year in a row, the Georgia Senate is advancing a bill that would enshrine a License to Discriminate into state law.

This morning, the Senate Judiciary Committee voted out Senate Bill 375 would allow adoption agencies — including taxpayer-funded ones — to refuse to work with same-sex couples or LGBT youth based on their “sincerely held religious beliefs.” 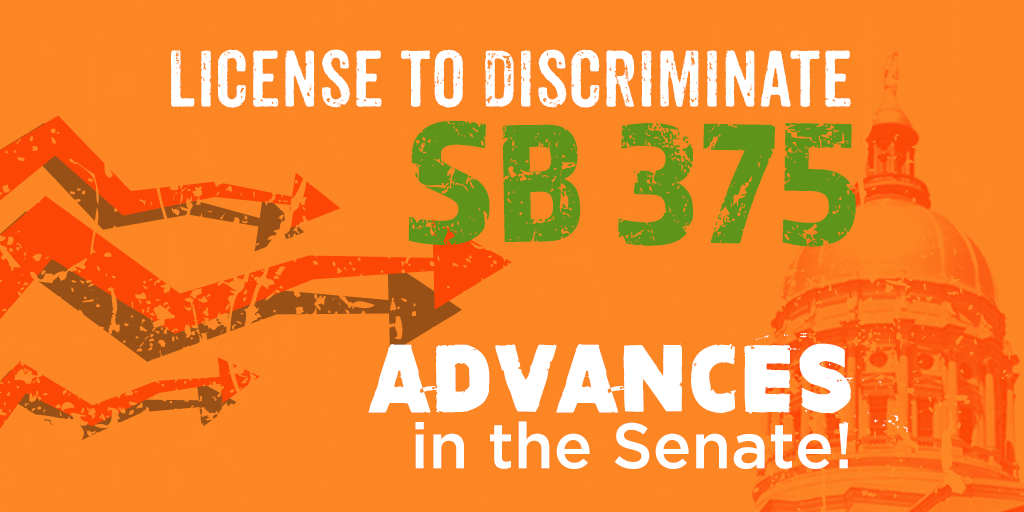 Now, this disastrous License to Discriminate is heading to Rules Committee, which could send it to the full Senate for a vote some time this week.

Senators William Ligon and Greg Kirk, perennial opponents of LGBT rights, are again spearheading the effort. Both sit on the Senate Judiciary Committee, which heard testimony on SB 375 on Friday and will hold a vote to advance the bill to the full senate this week, possibly as early as Tuesday.

We’ve heard some lawmakers think of this as a “compromise” bill compared to the broad RFRA bills of years past, because it focuses solely on Georgia’s adoption and foster care agencies. But discrimination is wrong, plain and simple, and there can’t be any compromise on that — especially when it means denying Georgia’s foster children access to loving homes.

And if SB 375 passes, that will be the result. Research from the Williams Institute shows that same-sex couples are four times more likely than opposite-sex couples to be raising adopted children, and six times more likely to be raising foster children. And child welfare advocates have been clear that passing this bill will do nothing to unburden Georgia’s adoption and foster care system. It could even leave LGBT youth waiting longer for loving homes.

Simply put, limiting LGBT Georgians’ ability to adopt will reduce the pool of available, loving homes. And since SB 375 gives adoption agencies the ability to refuse to work with LGBT youth who need a foster or adoptive home, that could further leave children — quite literally — out in the cold.

And let’s not forget: This fight over discrimination is dragging down our economy when we should be putting Georgia’s best business face forward. Toying with a License to Discriminate while the eyes of Amazon and the nation are on Georgia is simply irresponsible. That’s why the Georgia and Metro Atlanta chambers of commerce have both publicly registered their opposition to SB 375.