For Transgender Day of Visibility, Max Wants Other Georgians to Know He is More than A Trans Man Max Nijssen ~ Morrow, GA
Faith Leaders Add Their Voices to the Chorus of Georgians Calling on Lawmakers to Reject SB 375 March 14, 2018

Prominent faith voices are speaking out against SB 375—and taking lawmakers to task for using the concept of religious freedom as an excuse to discriminate against LGBT Georgians.

This weekend four faith leaders wrote into the Atlanta Journal-Constitution to implore lawmakers to reject SB 375, a bill that would allow taxpayer-funded adoption agencies in Georgia to discrimination against LGBT youth and same-sex couples. 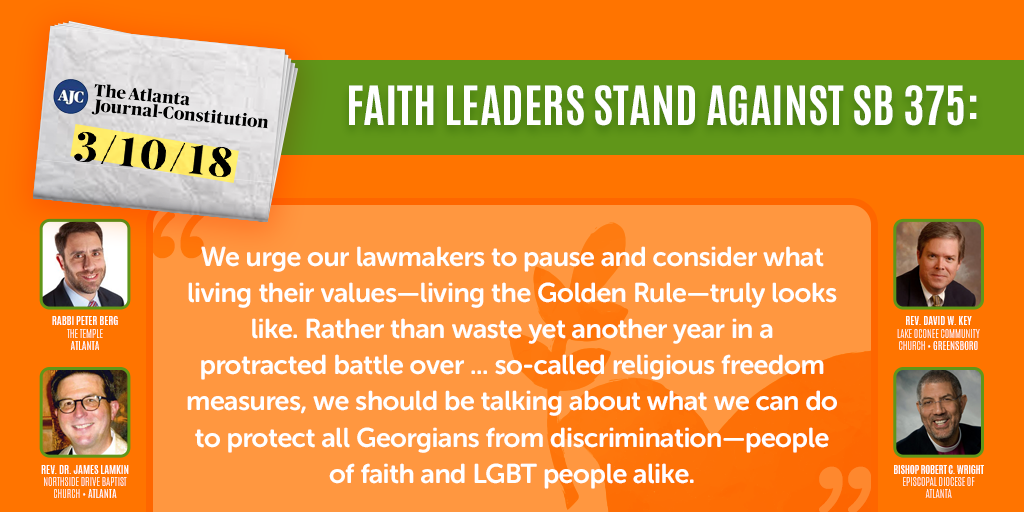 The letter’s authors are Rabbi Peter Berg of The Temple in Atlanta; Rev. David W. Key of the Lake Oconee Community Church in Greensboro; Rev. Dr. James Lamkin of Northside Drive Baptist Church in Atlanta; and Bishop Robert C. Wright of the Episcopal Diocese of Atlanta.

They urged lawmakers to instead ensure that the Golden Rule, “that universal principle that transcends so many of our faiths” is “more than a passive talking point.”

As faith leaders in our respective communities, we feel compelled to speak out now because we are dismayed that some of our state’s elected officials seem to be falling into an increasingly familiar annual tradition: pit Georgians against one another. Foster animosity of those who are different than us. Create false equivalencies that imply freedom of religion and equal treatment for all Georgians are two foreign concepts, which cannot coexist together. …

It’s a proposal we’ve seen in varying forms for at least the past four years here in Georgia. Year after year, lawmakers float various incarnations of so-called religious freedom bills that, curiously enough, many of us in Georgia’s religious communities have never supported or even asked for in the first place.

This year, enough is enough.

Faith voices have long been at the forefront of calling on Georgia’s elected leaders to reject bills that target LGBT Georgians for discrimination in the name of so-called “religious liberty.”

In 2016, a coalition of 300+ clergy from diverse faiths and denominations called on Governor Nathan Deal to reject HB 757, a broad piece of legislation that would have explicitly legalized discrimination against LGBT people, single women, religious minorities and other Georgians.

Georgia’s faith community was also quick to condemn President Donald Trump’s May 2017 executive order that opened the door for federal agencies to use religion as a justification to discriminate against LGBT and other Americans.

If you’re a person of faith or a faith leader in your community, join our coalition working to oppose SB 375 this year and anti-LGBT bills every year. Add your name to our faith pledge.