On Tuesday, by a vote of 8-0, the Augusta-Richmond County Commission approved the addition of sexual orientation and gender identity as protected categories to the list of nondiscrimination protections for the county’s municipal employees. 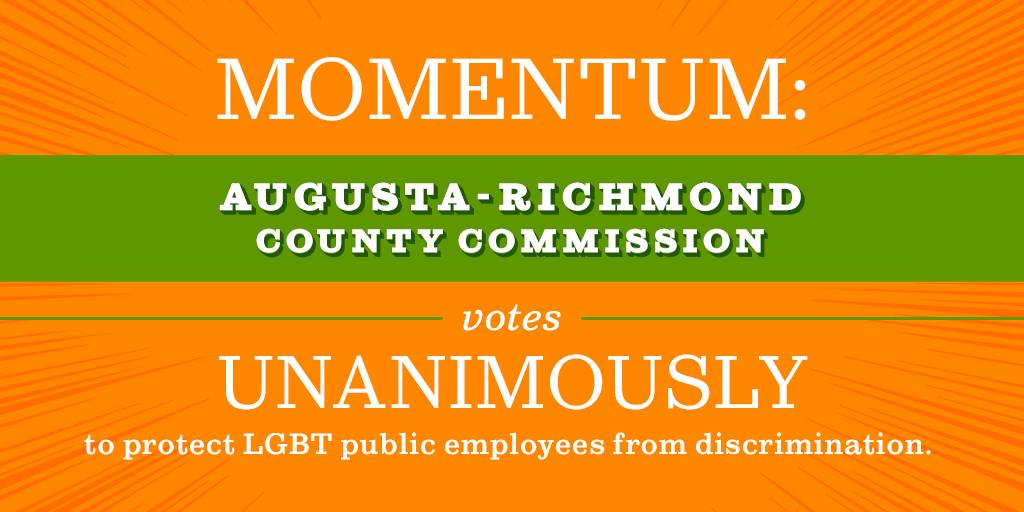 With the vote, Augusta joins other Georgia cities including Atlanta, Macon, Savannah, and Athens as those that protect municipal employees from discrimination on the basis of sexual orientation and gender identity.

Matt Duncan, President of Equality Augusta, said in a statement:

“I would like to thank the board of Equality Augusta for all their time and effort in making today’s vote possible, Georgia Equality and its Executive Director Jeff Graham for their support and guidance, Kellie Irving, the city’s EEO Compliance Director, and Augusta Pride and our entire LGBTQ Augusta community for showing our neighbors every day that our equality is important to all of us. Today is an historic day for our city and this vote is a wonderful way to kick off Augusta Pride 2018.”

Advocates had been hopeful a resolution could be reached in time for the city’s annual Pride Festival, running June 21-24. Talks about amending the employment discrimination statute began in 2016, as part of an effort to raise the city’s standing in the Municipal Equality Index, a yearly report from the Human Rights Campaign that assesses a city’s state of equality based on the treatment of their LGBTQ populations, as well as relevant laws and protections that exist for them.

Although several cities in the Peach State offer a patchwork of protections in housing, employment, and public accommodations for LGBTQ people, Georgia is still one of 31 states nationwide with no statewide comprehensive nondiscrimination laws. Bills have been introduced in every legislative session over the past several years that would remedy this, but none have moved out of committee. However, discriminatory bills have been by and large defeated for the past five years, including a measure this year that would have allowed publicly funded adoption agencies to discriminate against LGBTQ people when placing a child in the home.

We congratulate our friends and partners at Equality Augusta and Georgia Equality for their hard work in making these employment protections a reality. Victories such as these help advance and provide momentum for our movement to make sure that LGBTQ people will be protected statewide.