We’ve seen a major new development in Georgia’s quest to land Amazon’s second headquarters: Atlanta has been named to a list of the company’s top-20 finalists.

However, among the many requirements Amazon has regarding its new location is a commitment to diversity and inclusion, a topic that Georgia has not traditionally led on, particularly in the last couple of years regarding the LGBTQ community. Now, as we’re hearing  rumors that a an anti-LGBT “License to Discriminate” could be introduced during the 2018 session, it’s important to look back at the economic headaches these fights have cost us in years past. 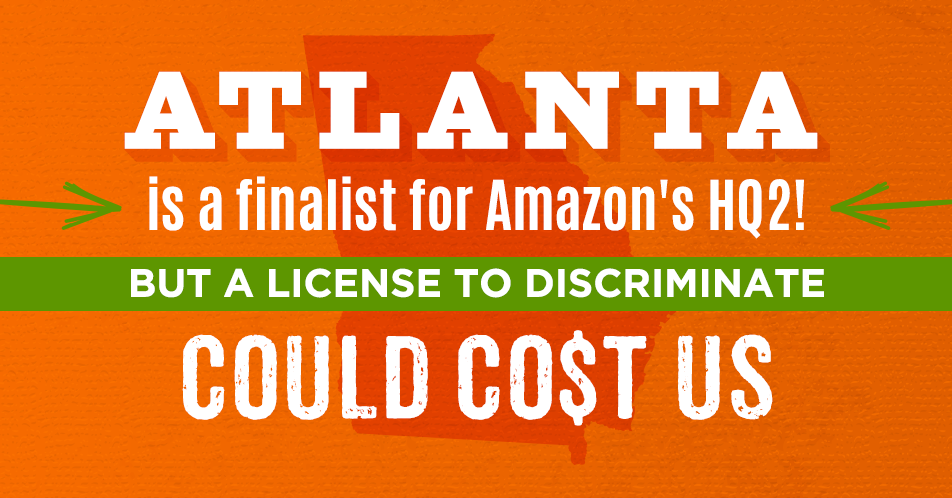 The multi-billion dollar retailer announced plans to open a second headquarters, known informally as HQ2, outside of their main campus in Seattle, Washington, on September 7 of last year.  Since then, cities and states across the country have been frenzied in pitching themselves to the company as a prime option for real estate, investment, and workforce.

Wherever HQ2 ends up, economies at the city and state level will experience a significant boon. Amazon’s initial investment could total as much as $5 billion, with tax credits nearing $850 million and the creation of more than 50,000 new jobs.

In 2016, legislators in Georgia presented HB 757, known as the Religious Freedom Restoration Act (RFRA), which supporters claimed would have protected the sincerely held religious beliefs of business owners by allowing them to deny services to LGBTQ people and offering no recourse for those discriminated against.

Opponents called the legislation what is was: state sanctioned anti-LGBTQ discrimination that would adversely affect Georgia’s economy. Despite heavy protest from the LGBTQ community and the larger Georgia business community, the bill passed through the General Assembly and went to Governor Nathan Deal’s desk for signature.

However, defying the legislature, Deal vetoed the bill, saying, “I have yet to see a factual justification for it in the state of Georgia. I do not know of a single instance where having a statute of that type would have changed the circumstances in any situation in our state.”

Governor Deal, in his veto, likely looked at the consequences faced earlier by states who had passed anti-LGBTQ legislation to the tune of public outcry and severe economic consequences. Indiana pushed through the bill that was the model for Georgia’s, signed at the time by then-Governor Mike Pence. When major conventions and investments began to pull resources from the state, and official government travel to Indiana was suspended by dozens of cities and states nationwide, the Indiana legislature repealed the law.

However, the most significant case of harms caused by discriminating against the LGBTQ community came in the form of HB2 in North Carolina. Although the bill did not deal with religious discrimination, it did explicitly seek to bar transgender individuals from using public accommodations that match the gender they know themselves to be, and it was described as one of the most anti-LGBTQ pieces of legislation to ever be put into law.

Backlash was immediate; entertainers pulled their concerts and events from the state, major companies like PayPal and Deutsche Bank canceled plans for expansion, and sports organizations such as the NCAA and the NBA withdrew their agreements to host tournaments and games in the state. All in all, North Carolina lost upwards of $600 million in economic investment and growth, not to mention thousands of jobs and its reputation. The outcry even led to the ouster of Governor Pat McCrory, who lost his bid for re-election last year.

We already know the economic consequences that Georgia faces without comprehensive non-discrimination protections for LGBTQ people. In January 2017, UCLA’s Williams Institute released a report detailing how, “stigma and discrimination have been linked to negative economic impacts.” According to the report:

On November 3, Governor Deal hosted an event where he unveiled that Georgia once again was declared the No. 1 state for business, based largely on its tourism dollars, with industry revenue in the last year near $3.1 billion and employment at 450,000 workers.

The state has successes to be proud of, and by passing comprehensive non-discrimination protections, we will continue to improve our standing as a great place to live and work. The selection of HQ2’s location is another “Olympic moment” for Georgia, and to attract the best in business, we must unequivocally state that we are open for business to everyone.

Click here to read the stories of fellow Georgians who also believe in comprehensive nondiscrimination.