For Transgender Day of Visibility, Max Wants Other Georgians to Know He is More than A Trans Man Max Nijssen ~ Morrow, GA
4 Things You Should Know About Georgia’s Fight for LGBTQ Equality in 2018 December 26, 2018

Another whirlwind year of work is nearly over and Georgians made strides in the fight for LGBTQ equality. As we prepare for 2019, let’s take a look back at what we accomplished this year. 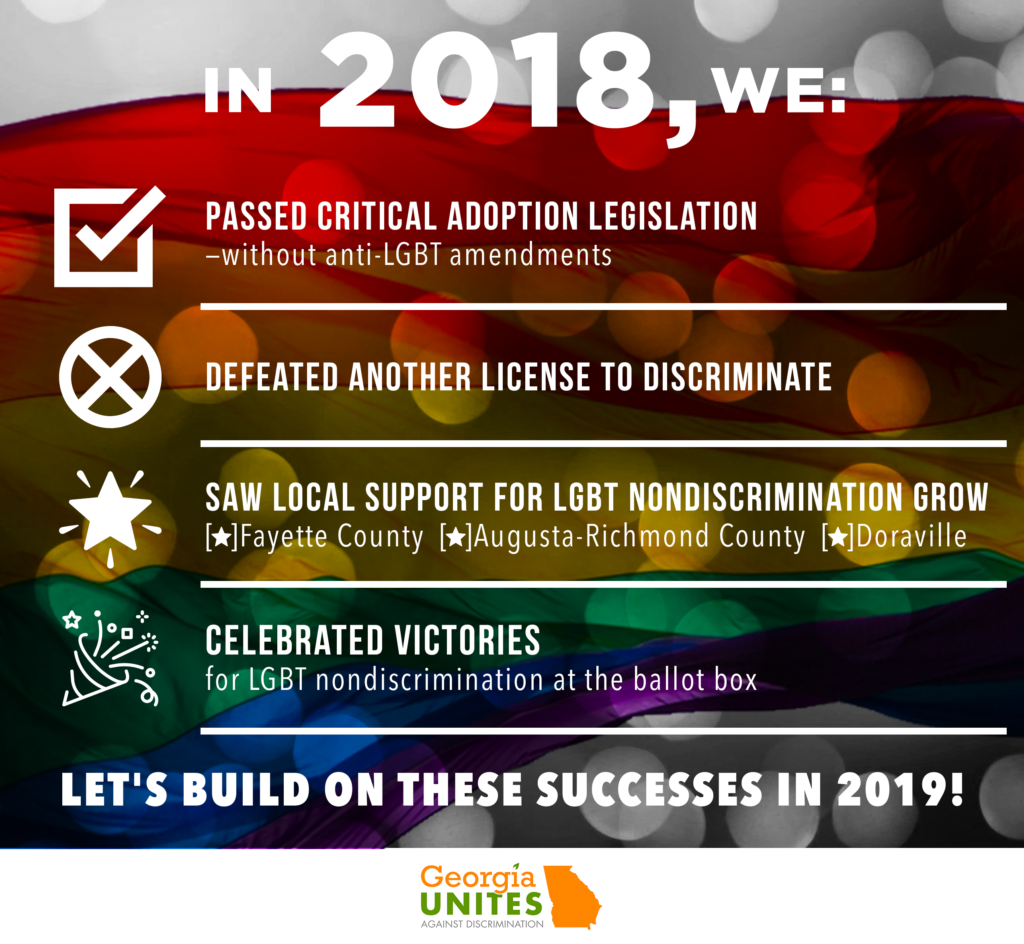 We started out with unfinished business, passing a clean adoption bill that was heldover from the 2017 session. Attempts to add an anti-LGBTQ amendment that would give taxpayer-funded adoption and foster care agencies a License to Discriminate against LGBTQ youth and same-sex couples were unsuccessful.

For the fifth year in a row, our coalition of hundreds of business, faith and other community leaders and thousands of individual Georgians defeated legislative attempts to enshrine anti-LGBT discrimination into Georgia law.

This time the bad bill was SB 375, a stand-alone version of the amendment opponents of equality were attempting to attach to adoption and foster care reform legislation. This was a critical victory, as research shows that same-sex couples adopt and foster children at a higher rate than different-sex couples, and child welfare advocates warned that adding discriminatory language to the bill would only make children wait longer for loving homes.

In November, Doraville enacted LGBTQ-inclusive nondiscrimination protections, becoming the second municipality to do so after Atlanta. The new policy protects against discrimination based on sexual orientation and gender identity in private employment, housing, and public accommodations. The policy also prohibits discrimination based on race, religion, color, sex, disability, national origin, ancestry, or military status.

And Augusta-Richmond County employees now can now go to work without fear of discrimination after the County Commission added sexual orientation and gender identity to protected categories of employment. Atlanta, Macon, Savannah, and Athens already protected municipal workers from this kind of discrimination.

In this year’s statewide elections, anti-LGBTQ legislators were defeated by opponents who made supporting equality a major part of their platform. Congratulations to Mary Francis Williams for unseating Sam Teasley in House District 37 and to Sally Harrell for winning her election against Fran Millar in Senate District 40. Both defeated legislators were proponents of anti-LGBTQ bills, including this year’s bad adoption bill.

Celebrating our new and re-elected #LGBTQ officials today! We can't wait to see them flex their leadership at the Statehouse in 2019—supporting LGBTQ-inclusive #civilrights legislation and working to stop any discriminatory bills. pic.twitter.com/Y74jYUsfb7

Several opponents of LGBTQ equality were defeated in their bids for re-election; State Senator Michael Williams lost his campaign for governor and State Senator Josh McKoon, author of the 2017 License to Discriminate bill, lost his attempt to become lieutenant governor.

We’ll continue working hard to defeat attempts to pass discriminatory legislation and support LGBTQ-inclusive civil rights laws in 2019. Until then, have a restful holiday season and happy New Year!